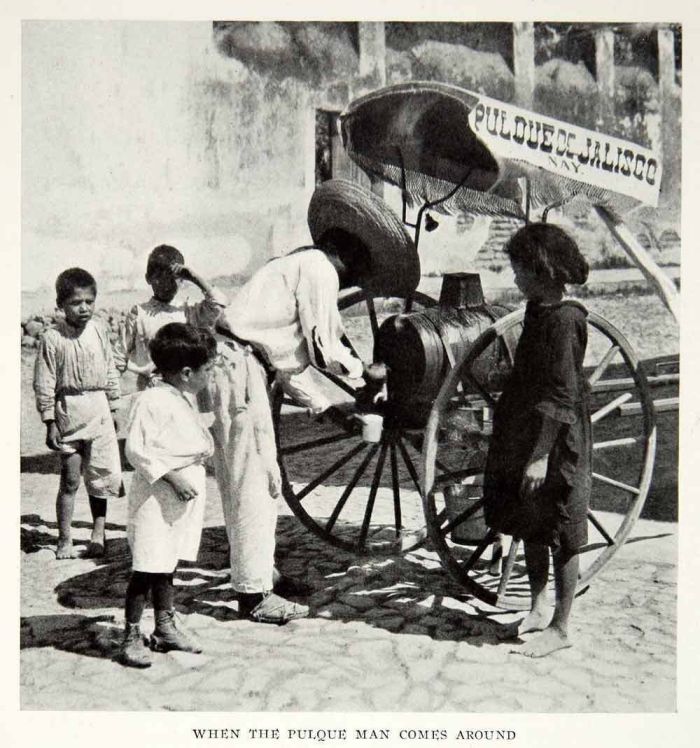 An old card of a typical Mexican pulque vendor.

This is a folk tale from Mexico that tells how a pulque vendor tricks the Devil. Pulque as you may remember from our post on the 400 Drunken Rabbit Gods of the Aztecs is a traditional Mexican alcoholic beverage that is made from fermented agave (or maguey). Although the story takes place on a completely different continent as the meetings the Devil had in Europe with Gambrinus (Belgium), Saint Sava (Serbia) and a Highlander (Scotland), there are definitely similarities in these stories. For now enjoy some Mexican folklore, salud!

Once upon a time there was a pulque vendor living in Guadalajara, Mexico. As he was walking the streets selling his liquid merchandise he would be so loud that he was heard from a long distance. The daily round of this pulque vendor actually became a way for people to tell the time. Well this colorful figure caught the idea of building a bridge over the nearby river. He drew a plan and got all prepared to start building this passage way over the water. But soon enough the pulque vendor realized that building a bridge was slightly more expensive that he had thought and he didn’t have enough money to complete his plan. Yet he didn’t give up hope and kept selling pulque for years to gain the needed money to finish his bridge.
On one warm summer evening after a long day of selling booze the pulque vendor wandered off to the spot where he hoped to realize his dream. As he sat down in thought about how he didn’t have that many years left to raise enough money and how it was likely that he would never get to see his bridge. Then he noticed a tall man dressed in a black cloak was observing him. They greeted each other and the vendor explained his problem to the stranger. “What can you give me if I finish building the bridge for you before the new day breaks?”, the strange man asked. The pulque vendor replied that he could only give him the money he had raised so far and some pulque in his cart. “Well, what about we make a deal. If I finish the bridge before the first sunlight, you are coming with me?”, the stranger said. As the pulque vendor realized he was speaking to the Devil he refused, but his evil companion didn’t give up that easy. “So how about I do it before the rooster crows for the first time?” On this condition the pulque vendor accepted the deal, as he liked his chances way better. A rooster may crow at any time during the night and definitely before the first light, he thought.
So the pulque vendor sat down on the river bank and watched the Devil begin his work. He felt happy because the bridge he dreamed of for many years would finally be built. He felt so confident about his sweet deal with the Devil that he even decided to take a nap. And as the vendor was sleeping, the Devil worked like crazy, as he laid brick after brick and finished the foundation of the bridge in no time. His clothes were soaked from his sweat and he got extremely thirsty, but still he continued working. And when the vendor woke up he rubbed his eyes in disbelieve about the progress the Devil had made while he was asleep. The whole bridge was completed, except for one last tower that the Devil was now working on.
The pulque vendor got terrified by the thought that no rooster might crow in the small amount of time the Devil still needed to complete his work. “What will become of me if this bird fails on me?” The Devil now only had a few bricks to lay and was laughing out loud. “Very soon this bridge will be finished and you will have to come with me.” In a final attempt to stretch time the pulque vendor replied: “Sure, I’ll go with you. But let’s have a drink first and toast to your victory.” The Devil saw he has just one single brick to lay and thought there was no possible way he would lose the bet now. And since he was dying of thirst he agreed to this kind offer.
So the vendor pulled his pulque cart to the Devil and told him he had 2 kinds of pulque. “One is called El que se queda (the one who stays) and the other is called El que se va. (the one who goes), which one do you prefer?” The Devil bursted into evil laughing and said: “I will take El que se queda in honor of my bridge which will remain here forever. But you can drink El que se va, as you will soon be gone.” The vendor took the 2 largest glasses he had and filled them all the way up with the requested pulque. The thirsty Devil finished his glass in one gulp, so the vendor quickly gave him a refill. This time the Devil drank only half the glass, before passing out on the ground. At that moment the first ray of sunlight came through and in the distance a rooster crowed for the first time. The Devil who was still laying on the ground turned into a ball of flames and dissapeared. The drink had just been too strong, even for the Devil. And that’s why it was called El que se queda.
Till this day nobody succeeded to finish the Devil’s bridge completely. Many laid the last brick in place, but the next day it had always fallen off or simply dissapeared.

Read more folk tales and articles on history and mythology on Lords of the Drinks.