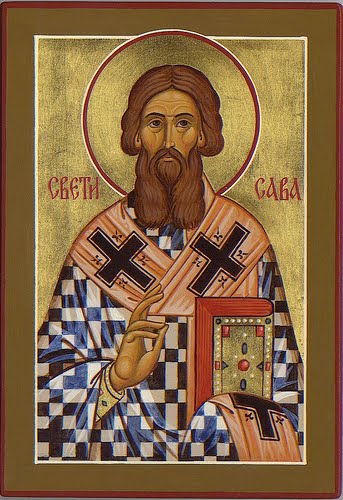 An Orthodox Christian icon of Saint Sava of Serbia.

This is a folktale from Serbia about the country’s national strong drink rakija. It reminds a bit of the legend of Gambrinus, which was told in Belgium and Holland, about the introduction of quality hoppy beer. In the Serbian tale the Devil appears again and introduces Saint Sava, an important prince and the first archbishop of medieval Serbia, to rakija. This fruit-distilled liquor plays an important role in the Serbian culture, as many people make their own and it’s consumed at every possible occasion.

As a young priest Saint Sava was walking through the mountains one day, when he stumbled upon the Devil. He greeted him politely as always, but the Devil wanted nothing to do with this ‘man of God’. When Sava asked him where he was going, the Devil replied this was none of his business. Then Sava tried a third  time and asked what Satan was doing in this place. The Devil said: “I would really like to farm this land, but I can’t do it  without a partner.”

Saint Sava then said he would be the Devil’s partner and they would each take half of  the harvest. They agreed to plant onions first. As their plants were growing, Saint Sava said the Devil he could choose his half of the harvest first. Satan, blinded by the beautiful onion plants thought he could trick the Serbian prince and said: “I’ll take everything above the ground, so you can have what’s under the soil.” Saint Sava wisely agreed and took the onions, while the Devil just got useless leaves.

The Devil was angry that he fooled himself, but the two  partnered up again the next year. This time they decided to grow cabage. As their crops were getting bigger, Sava asked the Devil again to choose his half of the harvest. “This time I won’t be fooled by the beautiful leaves above the ground”, he thought to himself and chose to take everything under the soil. When it was time to harvest, Sava cut everything above the ground and let the rest. The Devil came shortly after, and with him a live band to celebrate his sweet revenge on his partner. However, when he pulled the first plant from the ground, the bottom half turned out to be nothing more than skinny roots and dirt. Again he lost because of his own greed.

A cartoon of the story of Saint Sava and the Devil.

A year after the partners planted potatoes and this time the Devil went for the pretty tall plants above the ground when they bloomed. But when it got colder, his lovely plants dried up and Sava harvested some wonderful big potatoes from under the soil. For the fourth year they teamed up and grew wheat and of course the Devil chose wrong again. As Saint Sava took beautiful golden grain from the ears, his greedy partner once again had useless roots.

The Devil was out of his mind with rage, but he turned to Sava a 5th time and said: “Look priest, this time I want to make a vineyard with you. But if you trick me again, we will never be partners again.” Saint Sava agreed and in 3 years time they made themselves an amazing vineyard, with a huge amount of grapes. As they looked upon the fruits, Sava asked his partner: “Well now, we have so many grapes. What do you want from them, the juice or the mash?”

The Devil chose the mash over the “worthless juice” and they started to harvest the grapes, crushed them and strained the juice. Now both got the part they agreed on. Sava put his juice in wooden barrels to ferment. The prince was already thinking of the great wine he would have in time, when he saw the Devil pour water into his mash. His partner then made a copper kettle, in which he cooked the mash. He had built a still and not much later the first rakija came out of it.

Saint Sava had never seen this process before and he got very curious, so he went to the Devil and asked “What is that you’re making, my partner?” The Devil replied that the name of his drink was rakija. Sava, who never heard of this drink, asked if he could try some and see if it was any good. The Devil poured him a first cup, which Sava downed. Then another and a third. After that last one the priest felt drunk, and in fear he started to pray and hit crosses. The Devil saw he finally got his revenge and ran off screaming: “Haha, my partner.  Rakija is a medicine for the old, but a demon for the young.”

However, despite his last trick on the Serbian prince, they say the Devil learned his lesson from the whole farming experience. Ever since the day he got Saint Sava drunk, he never appeared anywhere where he heard there was a priest around.

Other posts about History and Mythology

“Or I go, or the Rakija goes” (Serbian song)

10 Alcoholic drinks that were invented as a medicine

3 thoughts on “Serbian folktale: The Devil gets the first archbishop Saint Sava drunk on rakija”