We promised you a real drunk story if Lords of the Drinks reached 30,000 hits or 1,000 followers. Since we first achieved 30,000 hits, you will read a story from 2012, when Nikolay slept in an open-air bed after performing a dangerous night stunt with two of his friends.

It was the summer of 2012. In Bulgaria, going to Black Sea is tradition that people try to keep every year, no matter if they have financial problems or too much work. Bulgarian seaside is known for the great parties, and, what a surprise, large amounts of alcohol consumed.

I hadn’t gone to Black Sea that year, so I decided to visit my friend Hurricane Klets in the city of Burgas (you know him from another scandalous drunk story). I was about to meet also another friend and drinker from my hometown who was on holiday there.

So I had to start the adventure from the very beginning. In the early afternoon, I entered the bus in the capital Sofia with a bottle of gin, a bottle of a chaser, a plastic cup, an MP3 player and a set of headphones. A perfect start of a journey to the seaside. I didn’t want to bother the passengers too much, so I chose a seat in the rear corner of the bus.

The six-hour trip was fun. I was already drunk when I talked to foreign tourists who were also heading to Black Sea. Shortly before entering Burgas, I called the friend from my town and told him to wait for me at the bus station. This is where things started getting wrong.

Back then, I had a phone with a very screwed up battery. It would only last for several hours. I dropped of the bus with my luggage pretty drunk and…saw that my friend was not there. I thought he would appear in a few minutes, so I just waited. And waited. And waited. But he wasn’t there and my phone was off.

I sat in front of the electronic store nearby, opened my laptop and started searching for wireless networks without any success. I started banging my laptop and shouting in fury, when the guard saw me and chased me away. He was kind enough to tell me that there is Wi-Fi in the gas station across the street.

I went there and got in touch with the Hurricane, who lives in a village 17 km away from Burgas. He managed to catch the last bus and come to the gas station. Then we called my friend from Hurricane’s phone. Here’s what happened meanwhile:

The friend from my town was waiting for me at the same bus station, but around the corner. In order not to get too bored, he drank several 2-liter bottles of beer and decided to catch a bus to his home. He received our call right after the bus took him, so he dropped off at the next station, where we went by taxi. We finally found each other.

It was only natural that we would start drinking right thereafter. We sat in a tavern where we drank another bottle of gin and then it was time for the crazy idea. We decided to perform night diving from the bridge you saw under the header of the article.

We were running to the bridge when the friend from my town fell and twisted his ankle, but didn’t feel anything. We jumped from the “first floor” of the bridge, but then we decided it was not funny enough. At that point, the Hurricane gave up, and the rest of us had to squeeze through a tangle of protruding pieces of iron to get to the top; the staircase was closed.

I was scared. Black Sea was raving some 15 meters (45 ft) below me in the darkness. I knew there were another sharp pieces of iron below the water surface. I gave way to my friend and then I realized I can’t wriggle again through the iron. The only way was down to the black noisy water. And I jumped.

The fall was f*cking long. I fell on my left side, which means that the water violently slapped my left leg. The swimming back to the surface was also f*cking long. The impact with the water wrenched my watch, but somehow it didn’t fall off my hand. Later on, I found out that some people died after jumping from exactly the same place.

When I went out, the friend from my town couldn’t walk because of his twisted ankle. Me and the Hurricane carried him to a taxi which took us to the hospital. The doctors there were even more drunk than us and were not giving a sh*t. The one who examined my friend could barely open his eyes and told him “You’re completely fine, just put some ice and I’ll see you tomorrow on the beach”.

Wrong. It later turned out that he had torn ligaments. Because of the attitude we started shouting and swearing in the hospital and were kicked out. Then another cab took my injured friend to his home. Me and the Hurricane went to drink another liter of gin in the bar.

Next thing – the waiter was trying to wake me up and it was already light outside. I said “OK, I’ll just wait for my friend to come back.” “He left an hour and a half ago,” the waiter laughed.

Oh, no. My phone was still off, I didn’t know where the Hurricane lives, and I had only obscure memories of the location of my other friend’s home. I took a cab and still drunk, I gave him directions to the neighborhood of the injured friend. He dropped me off at a place that looked familiar; then I entered the blocks in the area trying to find his apartment, but unsuccessfully. Then, I found this wonderful bed outside: 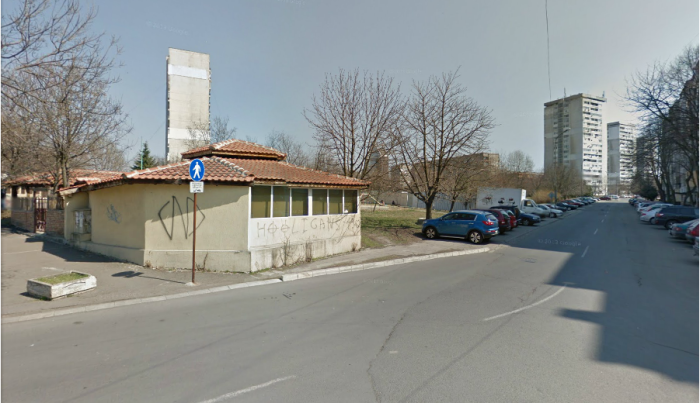 Yes, that’s right. I took a nap on the cement border just below the writing HOOLIGANS on this small house. It was during daytime. As you can see, there is both a pedestrian area and a street for cars, and yes, many of them were passing by. At some point I even heard a couple of mothers with small babies ticking in resentment while I was delightfully resting with closed eyes on this improvised bed.

I fully woke up at noon, found an internet café and got in touch with the Hurricane who came to take me to his home. He was feeling guilty for what happened, but he didn’t know that we would laugh at this story after some time.

As for the injured friend, his ankle is fine now. Actually, it turned out I was in front of his door when I was looking for his apartment, but didn’t recognize it. He stayed home for the rest of his vacation, but me and the Hurricane drank heavily for several more days. However, this story will be remembered as the most scandalous one from my sea vacation in 2012.

You want to read more true drunk stories? Check out our collection.

4 thoughts on “Drunk sea diving and an open-air bed”