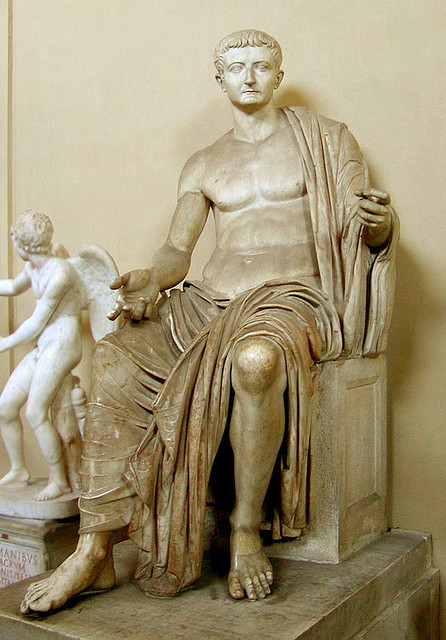 A statue of emperor Tiberius. It was found in the Italian town Priverno and can currently be seen in the Vatican Museum.

Tiberius was born in the year 42 BC under the name Tiberius Claudius Nero and died 79 years later as Tiberius Augustus Caesar. Roman names in the higher families changed all the time because of re-marriage, adoption or change of status. We therefor try to use as few as possible in this article to avoid confusion. The only thing to remember here is that Tiberius was a general who was that successful in his military missions that emperor Augustus adopted him as a son. Later Tiberius married his own stepsister Julia and also became the emperor’s son-in-law. Just another day at the office in ancient Rome.

However Tiberius seemed quite different from the power hungry notables at the imperial court. He became a national  hero with victories in Pannonia, Dalmatia, Raetia and Germania, where he discovered the source of the Danube river, but he showed no interest in political power. Basically he preferred to party without the fear of being murdered all the time. Tiberius was a simple guy with simple needs, which meant plenty of wine and different sex partners.

Stepfather Augustus saw his natural heir in the fighting machine, but Tiberius surprisingly retired in 6 BC and moved to the Greek island Rhodes. Also to get away from his wife Julia who wasn’t a big fan of him seeing other women. Tiberius partied for ten years at Rhodes but when Augustus lost both his grandsons within 2 years the former general was called back to Rome to face his fate. For some years he was granted the same powers as the emperor and after the death of Augustus in 14 AD Tiberius was mentioned as the sole surviving heir in his will.

From the start of his reign Tiberius showed no interest at all for the job. He didn’t even want full power and suggested to the Senate he could rule just part of the state. In the end Tiberius couldn’t escape full responsibility, but Rome’s most powerful man refused a crown, laurels or fancy titles. He also didn’t feel like getting involved in state business 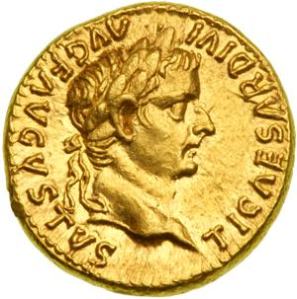 Tiberius portrait on a Roman coin.

and practically let the Senate rule the empire by itself, while the new emperor honored the winegod Bacchus. Twice Tiberius tried to share some of his duties with others. In 18 AD Tiberius gave the successful general Germanicus authority over the Eastern part of the Roman Empire and in 22 AD he shared the tribunician authority with his only son Drusus. Both however died within a year after being appointed.

In 26 AD Tiberius took it a step further and left Rome to live on the island Capri. While he turned that into a party island he basically left the Praetorian Prefect Sejanus in charge. Until the puppet tried to overthrow his master and Tiberius had Sejanus executed in 31 AD. If we may believe the Roman sources the emperor spent the last years of his life drinking and satisfying his perverted fantasies. While his will paved the way for a lot more chaos in Rome. If you ever considered it to be fun to write your will drunk, pay attention…

Tiberius stated that his nephew and adopted son Caligula should rule the empire together with his grandson Tiberius Gemellus. Practically the first act of Caligula was to have Tiberius Gemellus killed and seize absolute power. He then officially became the craziest Roman emperor in history, while totally proving his reputation as a sadist. Caligula had people killed and tortured for his own sick amusement, lost a solid 2.7 billion sesterces (around 810 million euros these days) of the family fortune and on top of all appointed his favorite horse as a member of the Senate.

By that time Tiberius wasn’t considered a national hero anymore. There was a tradition that Roman emperors could be declared a God. Augustus for example got his divine honors after he died. But when Tiberius died people were revolting in the streets of Rome when some just mentioned this treatment. In the end  the Senate decided Tiberius was not divine at all and he got a sober funeral. So he wasn’t the best emperor Rome had ever known, he did initiate the drunkest years the city had ever seen as the next 4 emperors and their entourages partied their asses off. With that he ended a tradition of centuries in Greek-Roman culture of moderate drinking. It’s not without reason Tiberius even had a cocktail  named after him.  And therefor we say: ave Caesar, morituri te salutant, let’s get smashed!

More drinkers that left their mark on the world’s history