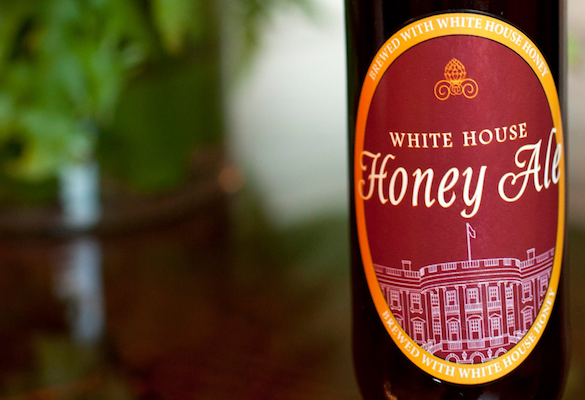 A bottle of homebrew beer from the White House.

While most people in the United States were getting crazy over the Superbowl, it’s possible you missed the most important American tv-moment of the day. In an exclusive interview with NBC News president Barack Obama shared a beer with reporter Savannah Guthrie (see video below). But not just any beer, under his rule homebrew made a remarkable comeback in the White House. Obama claims to be the first president since George Washington (1732-1799) who brews his own beer. The first Obama beer that came out in 2011 was a honey ale, which is made with honey from his wife Michelle Obama’s garden. In 2012 his kitchen also started making White House Honey  Blonde Ale, White House Honey Porter and White House Honey Brown. According to Obama the reviews are quite good. Too bad we’ll probably never be able to verify that since the White House brews usually come in small amounts (around 100 bottles a time) for special occasions like the Superbowl or St. Patrick’s Day. Still the most important conclusion must be that homebrewing really is hot. The figures were already there, but when even the president of the United States joins this trend… We wouldn’t be surprised if a whole bunch of celebrities will follow soon. Micky Bumbar . Related articles on Lords of the Drinks: 13 common mistakes you can make with homebrew beer Obama’s drunk secret service agents give away security details America allows home beermaking in all states The U1600 Tour, the oldest bars and pubs in Europe 5 kinds of boozy party snacks