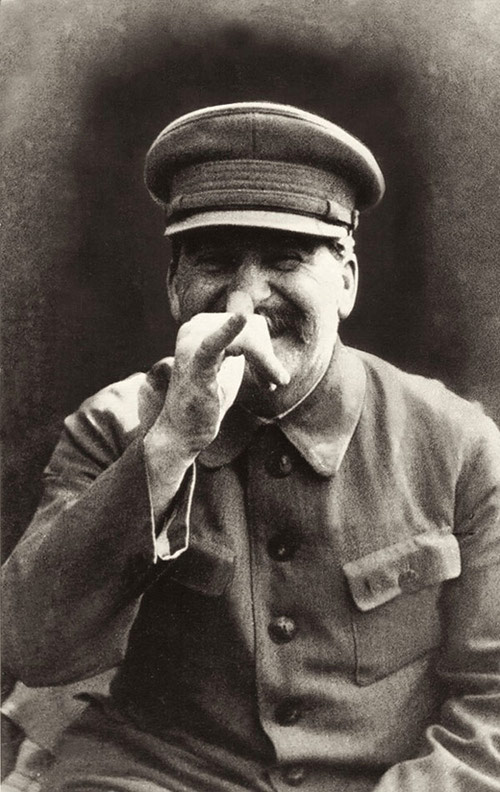 Jozef Stalin was always up for a drink.

Speaking of mean drunks, Jozef Stalin probably holds the record of having most people killed in the history of men. Experts estimated that the Soviet leader was responsible (direct or indirect) for the death of around 40 million people. Sure the health freaks are quick to point out that this was a result of his paranoia caused by his alcohol abuse. But the fact that they say it in their own language and not in German is also thanks to alcohol. For it was vodka and some good Georgian wines that made Stalin and Churchill allies. One night of hardcore drinking between the English and Soviet leader in the end caused the downfall of the third Reich.

Stalin was born in 1878 in Georgia under the name Jozef Vissarionovitsj Djugashvili. His father was an alcoholic who used to beat him. And if that wasn’t enough he also had a withered arm, a clubbed food and a face covered by small pox. Add the fact that he would never grow over 1.64 meters and you have proper material for the psychologists. His shortcomings only made him hungrier for power it seemed. And when he finally was in charge of the Soviet-Union he had everybody killed who he thought could ever take any of that power away from him. This basically meant he killed all the Soviet party big shots, their families and several millions more.

This is the Stalin we all know from the history books. But there was also a different side to his character. For example he threw big drinking parties every night, which reminded of the days of Tsar Peter the Great. During these events Stalin could be extremely charming and spoiling his guests with the best vodka’s and of course wines from his home region. As we explained to you wine is an almost sacred good for Georgians and Stalin in that way stayed true to his roots.

But his greatest act was probably a drunken night he had with the British leader Winston Churchill, who was a known heavy drinker himself, in 1942. Until that moment Churchill completely abhorred communism and everyone who had anything to do with it. A few years before he openly admired the Italian fascist leader Benito Mussulini, saying his line of politics could be a great way to stop the socialists. Needless to say this made dealing with Stalin not really easy. But all of this changed in August 1942 when Churchill was invited to a banquet in Moscow. The first meeting with Stalin by the British prime minister was archived as ‘Operation Bracelet’. History experts always pointed out that this meeting was a key point that made the Nazis lose the war. But it wasn’t till May 2013 that the National Archives revealed what actually went down when the two leaders met.

Sir Alec Cadogan, under-secretary at the foreign office, who accompanied Churchill explained in a letter what happened. At first the banquet seemed to turn into a disaster since Stalin’s demands were not to Churchill’s liking at all. In a last attempt to agree terms he asked for a meeting with just the two of them. At 01.00 in the morning Cadogan entered Stalins private room and saw the following scene: “There I found Winston and Stalin, and Molotov (Soviet minister of foreign affairs Vjatjeslav Molotov) who has joined them, sitting with a heavily-laden board between them: food of all kinds crowned by a sucking pig and innumerable bottles. What Stalin made me drink seemed pretty savage: Winston, who by that time was complaining of a slight headache, seemed wisely to be confining himself to a comparatively innocuous effervescent Caucasian red wine. Everyone seemed to be as merry as a marriage bell.”

After Cadogan’s arrival the negotiations on an East-West alliance continued till 03.00 o’clock.  As the British delegation was flying back at 04.15. On the way back Churchill was in a great mood, as Cadogan describes: “I think the two great men really made contact and got on terms. Certainly Winston was impressed and I think that feeling was reciprocated… Anyhow conditions have been established in which messages exchanged between the two will mean twice as much, or more, than they did before.”

It’s also good to know that drinking didn’t kill Stalin when he died in 1953, smoking did. But that makes sense since the two of them go so well together. There’s no doubt his regime was extremely tough, not in the last place to his own people, and it couldn’t have been easy to cooperate with a man like that. Probably even impossible if alcohol didn’t smoothen the deal. So at least ‘Father Stalin’ taught us one valuable lesson.