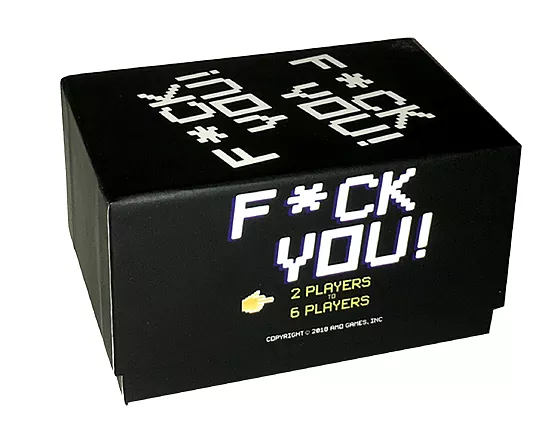 “Fuck You!” is a fun drinking game for 2 players or more.

If you love drinking games and never let an opportunity slide to tell someone to go fuck themselves, pay close attention. Entrepeneurs and drinking enthousiasts Tony O’Hara and JD McCullough claim they came up with the perfect drinking game called Fuck You!. By supporting their crowdfunding project you can help them achieve their dream and enrich the world of drinking with a new game. This website also explains the rules pretty clear, so let’s not bother to copy/paste that. Instead we had a small interview with co-creator O’Hara. Enjoy.
– First a little bit about yourself. Where are you from, how would you describe yourself as a drinker and what’s your weapon of choice when you start drinking?
Born in Jacksonville Florida, I would describe myself as the drinker all my friends aspire to beat in drinking contests. My weapon of choice for drinking is beer pong.

– So you invented a drinking game witch a catchy name, so let’s start with that. Why “Fuck You”?
Why fuck you as the title of the game? because who doesn’t like telling people to go fuck themselves.

– What’s the point of the game? To get drunk yourself or to get the other player(s) drunk?
The point of the game is spell out the word fuck you before your opponents and then you gotta tell everyone playing fuck you. But for the drinking version its absolutely to get drunk and get your friends drunk. No one leaves sober.

– You take pride in the fact that you created a game that is fun to play for a group of people as well as just 2. Why was this important to you?
The base game can be played with as little as two people. That was important because sometimes that’s all the people you have and there really just aren’t many games that are fun with just 2-3 people. This really is one of the few that’s amazing no matter how many people are playing.

– Can you explain in a few sentences what people who never played Fuck You are missing?
What people are missing that haven’t played before is a friendly way to drink and cuss out their friends, as well as everything else that screws them over in the game. The entire game play is fucking everyone over so they can’t win and you can.

– Are there any good stories (drunken shenanigans or bad hangovers) that came from a game of Fuck You that you want to share with us?
Bad hangovers from this game are endless, but shenanigans sure… There’s a supreme leader card in the game that allows you to make a rule. aside from the obvious of turning it into a stripping game with that rule I like to use it more so like dares. once I played with 4 people and every time a drink card was drawn the person who drew it was dared to do something stupid. Which is the case for most successful drinking games. In my mind this has the potential of Cards against Humanity with a hell of a lot more drinking and as the saying goes… if you don’t like the game then “fuck you”.