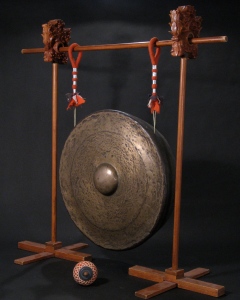 Time for the first joke of the new year then. All those serious stories on famous drunkards, history and mythology and recipes for hangover cures are nice, but sometimes you don’t want to think too much and just share a laugh with your friends. Be sure to use this one next time you’re standing at the bar. Enjoy!

After years of crashing on other people’s couches a drunken bum gets his own flat appartment. After a week he invites his friend for a little housewarming party with a few liquid refreshments. They get right down to business and all are already pretty drunk, when the host decides to give the rest a tour of the house.
There’s not too much furniture, just a shitload of empty bottles. Then they reach the bedroom, which contains besides an old matrass also a beautiful Indonesian gong. Quite in contrast with the rest of the interior.
Surprised one of the bum’s friends asks: “What is that?”
“Well, it came with the house”, the bum says. “But I figured out that this is a talking clock.”
His mate looks surprised and asks how this ‘clock’ works. The bum then picks up a hammer and gives the gong an ear-shattering pound. “BOOOOOOOOOONNNNNGGGGGG.”
His friends look at each other, agreeing in silence that the bum has officially lost his mind.
But then they hear an angry voice on the other side of the wall scream: “What the fuck, asshole?! It’s 3 am in the morning, for fuck  sake!”

More drinking jokes on Lords of the Drinks