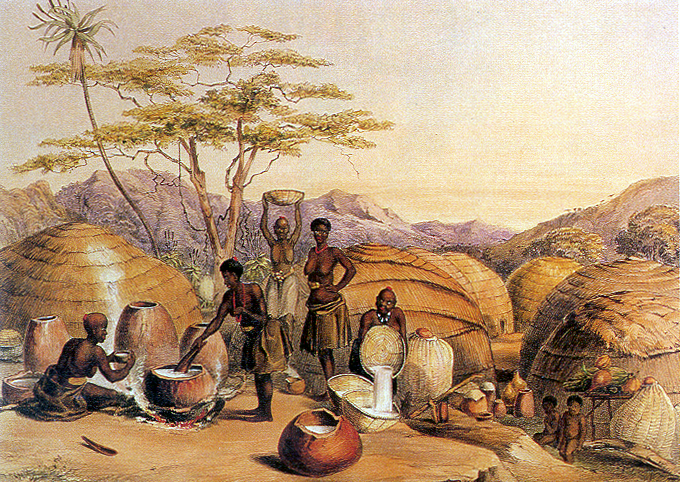 Beer brewing has traditionally always been a woman’s job at the Zulus ever since the Goddess Mbaba Mwana Waresa introduced this craft to humans.

Most people can probably tell you who Dionysus or Bacchus is, since ancient Greek and Roman mythology are quite well spread in the Western World. But have you ever heard of an African colleague of these Wine Gods called Mbaba Mwana Waresa? Well, the Zulus believe that this Goddess created beer and taught people how to brew it themselves. That’s right fellows, according to the legend this worldwide symbol for masculinity was a female invention.

Mbaba Mwana Waresa is quite an important figure for the Zulus in South Africa. Probably even the most well loved too, as she is the Goddess of rain, rainbows, agriculture, fertility and of course beer. Yes, we are using present time because even though many Zulus converted to Christianity during the colonization of South Africa, many have not forgotten their ancestral beliefs. According to the myth Mbaba Mwana Waresa lives in the sky in a house with rainbow colors and that’s why she is also known as Lady Rainbow. When the thunder rolls, that’s just her playing the bongo, as she blesses the land with much needed rain.

But enough about rainbows, let’s get to the invention of beer. There’s actually quite a romantic story behind it. The Zulus believe that Mbaba Mwana Waresa could not find a proper husband to marry in heaven and therefor came to South Africa to see if any mortal man could meet her demands. She indeed found a nice herdsman named Thandiwe, who managed to catch her interest by singing her a beautiful song. Still the Goddess wasn’t quite convinced that this mortal would also be marriage material and she decided to test Thandiwe. Mbaba Mwana Waresa sent him a gorgeous potential bride and shapeshifted in an ugly old woman herself. Thandiwe however could not be fooled and recognized her right away. Mbaba Mwana Waresa was convinced he was the right man for her and they got married.

But by marrying a mortal the popular Goddess had pissed off some of the other Gods, since they looked down on humans. But Mbaba Mwana Waresa fixed this conflict the way all conflicts should be handled: with beer. This drink she invented was said to bring the mortals feel closer to the Gods and with that the bond between both was restored. To make sure that bond would not be broken again the Goddess shared her brewing skills with the humans and made them self-sufficient.

Until this very day beer still plays an important role in the Zulu culture. The traditional kind named umqombothi is made from sorghum and always by women. All in the good tradition of the first female brewer Mbaba Mwana Waresa of course.

There’s also a special procedure before everyone can start drinking. First the woman who brewed the beer skims the froth off and pours it on the ground as an offering to the ancestors and spirits. After that the hostess drinks first to show her guests that the beer is safe to drink. Then the host drinks to make sure the quality is good enough for his guests. If he is satisfied with his wife’s brew, the guests are served in order of their status. Still all people drink from the same clay pot or gourd. Everyone must drink while sitting or squatting and men should take off their hats, out of respect for Mbaba Mwana Waresa’s gift to humanity.

3 thoughts on “Mbaba Mwana Waresa, the Goddess who gave Zulus beer to feel closer to the Gods”