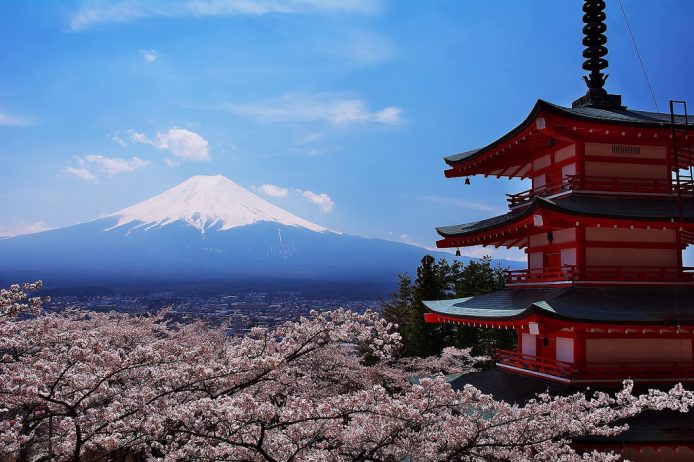 The saga of the white saké takes place at the foot of the famous Mount Fuji in Japan.

Japan has a very rich culture when it comes to myths and sagas. We found one about their national drink saké that we like to share with you. As you probably know saké is a rice wine that is used in many traditional ceremonies. This folk tale is about a rare version of the drink with a distinct white color and magical power, as it was made by shōjōs, sea spirits that were said to live on the coast spending their lives drinking and partying. As every good mythological story this one contains a good moral as well. Hope you enjoy it.

The story takes place 2.000 years ago or even more, when in one night Mount Fuji, the highest mountain in Japan, came to being. Nearby lived a poor man named Yurine, who was a big fan of saké. Even though he has very little money he wouldn’t let a day go by without drinking some. But the day after the appearance of Mount Fuji Yurine got ill and he skipped his daily dose of saké. While living in abstinence his health got worse and worse till the point that Yurine felt his end was near. He decided to give himself the pleasure of drinking saké one last time before he died and called his only son Koyuri to get him a drink.

The 14-year old boy searched the whole house, but there was no saké and not a single coin left to buy some. So he took a gourd, left the house and wandered upon the beach, thinking of a way to get his dying father his beloved drink. On the beach he stumbled upon a man and a woman sitting under a large tree. Their hair and bodies were colored red and they had sea weed for clothes. At first Koyuri was scared, but their voices were calm and friendly and when the man signed him to approach he overcame his fear and joined them. That’s when he saw the couple was drinking saké from flat cups known as sakadzuki, and on the sand behind them was a huge jar full of booze. Although the saké was much more white than he ever saw before the two seemed to enjoy it a lot.

After a while he told his new friends about his father and asked if he could take a little saké home. The red man filled up the boy’s gourd and Koyuri ran home to his father. “Here, father, here… I’ve got you the saké and it’s the best I have ever seen. I’m sure it tastes delicious too. Please try it and tell me.” His father drank the rice wine and was very satisfied. He even said it was the best saké he ever tasted in his life. As he was still alive the next day he wanted more. So Koyuri went to his red friends, who filled up his gourd again, and this scenario repeated itself for 5 days in a row. By then his father miraculously had almost fully recovered from his illness.

In the hut next to Yurine lived an unpleasant neighbour called Mamikiko. He was also very fond of saké, but too poor to get it. When he heard his neighbour had been drinking his favorite drink 5 days in a row he got very jealous. Mamikiko called Koyuri and asked him where he got the saké. The boy told him about the red people under their tree that filled up his gourd every day. The nasty neighbour snatched his gourd and greedily started drinking from it. But soon enough he spat out what was left in his mouth and threw down the gourd. “This is disgusting. What filth is this? To your father you give excellent saké and you give foul water to me? I’ll teach you a lesson.” And he gave Koyuri a severe beating, before ordering the boy to take him to the red people on the beach.

Koyuri obeyed Mamikiko, while crying over the loss of his father’s saké and fear to anger his red friends. They were sitting in their usual spot drinking joyfully. “Hey boy, what are you crying about?”, the red man asked. “And why are you crying? Has your father drunk the saké already? If so he must be almost as fond of it as we are.” Koyuri explained how Mamikiko drank his father’s booze, then spat it out and threw the rest away. He asked if he could please have some more for his father. The red man told him not to worry and filled up his gourd again. He seemed to be quite amused hearing how Mamikiko was disgusted by the taste of his drink.

The rude neighbour came forward and said: “I’m also very fond of saké. Will you give me some?” The red man smiled and said: “Oh yes, help yourself.” Mamikiko filled the largest cup he could find and brought it to his nose. The saké smelled delicious, but as soon as he brought it o his lips he had to spit again. It was the same nasty taste as before. “What is the meaning of this?”, he cried out. The red man looked at him and said: “You do not seem to be aware of who I am. Well, I will tell you that I am a shojo of high degree, and I live deep in the bottom of the ocean near the Sea Dragon’s Palace. Recently we heard that a sacred mountain had arisen on the edge of the sea, and, as it is a lucky omen, and a sign that the Empire of Japan will exist in perpetuity, I have

‘You do not seem to be aware of who I am. Well, I will tell you that I am a shōjō of high degree, and I live deep in the bottom of the ocean near the Sea Dragon’s Palace. Recently we heard that a sacred mountain had arisen on the edge of the sea, and, as it is a lucky omen, and a sign that the Empire of Japan will exist in perpetuity, I have come here to see it. While enjoying the magnificent scene from Suruga coast I met this good boy Koyuri, who asked for saké for his poor sick old father, and I gave him some. Now, this saké is not ordinary saké, but sacred, and those who drink it live for ever and retain their youth; moreover, it cures all diseases even in the aged. But you must know that any medicine is sometimes a poison, and thus it is that this sweet sacred white saké is good only in taste to the righteous, and bad-tasting and poisonous to the wicked. Thus I know that, as it tastes evil to you, you are an evil and wicked man, selfish and greedy.”

Both shōjōs laughed at Mamikiko, who got very frightened hearing the drops he must have swallowed would poison and kill him. He begged for forgiveness and his life to be spared and vowed he would reform his life if they gave him a second chance.The shōjō gave him some powder and said: “Mix this with some saké and drink that, so you’ll be fine. For it’s better to repent and reform at an old age than not at all. This time when Mamikiko drank the wine he found it sweet and delicious. It made him feel well and he kept his promise to become a good man. He made friends with Yurine and treated Koyuri well. A few years later the neigbours built a hut together at the southern base of Mount Fuji, where they brew saké from a recipe that the shōjōs gave them. They gave their drink to everyone who suffered from saké poisoning to make them well again. Both Mamikiko and Yurine lived for 300 years.