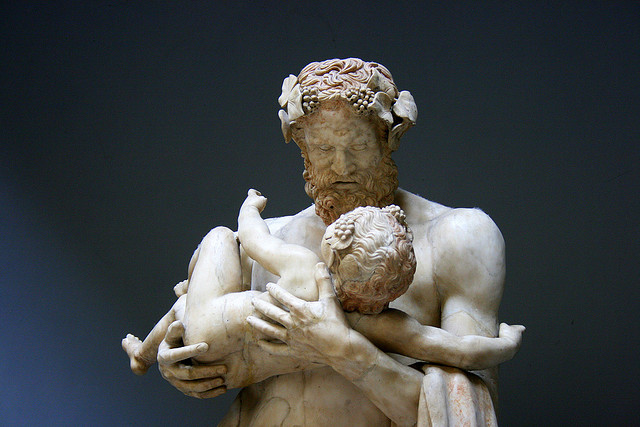 A statue of Silenus with the young God Dionysus on his arm.

The ancient Greeks and Romans had Gods for nearly everything. One of the most famous now, and most popular in those days, was Dionysus, or Bacchus in Roman. Less well known is his loyal sidekick Silenus. A shame because this old drunkard  was the one who taught the God of Wine and Partying how to party in the first place. Silenus himself was also the God of dance, the wine press and drunkenness, indeed not a bad mentor to have. Not at all.

Like many mythical figures there are some things about Silenus that are open for discussion, but we’ll get to that later. Let’s start with the stuff that most sources agree on. It’s said that Silenus was the son of the God Hermes, and he was told to take care of the young God Dionysos. As a mentor he taught his young protégé how to enjoy wine, music and parties. When Dionysos later became the God of Wine and Partying,  Silenus stayed with him as his loyal companion. Always in a good mood and always completely wasted. 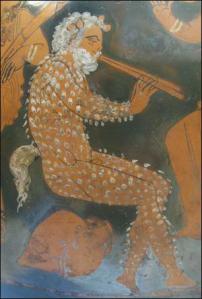 Silenus portrayed as a satyr.

Satyrs and Sileni
The way Silenus was portrayed however wasn’t always the same. According to some sources he was a satyr, a man with the legs, tail and ears of a horse or donkey. Other times he is just an old man sitting on a donkey. In both cases there are usually some other satyrs around, whom are known as the Sileni. Silenus is said to be their father or even grandfather. Therfor Silenus is usually portrayed as a balding old man with white hair all over his body, as where the Sileni look significantly younger. However, where ‘normal’ satyrs usually spend all their time chasing nymphs for their sexual urges, the Sileni are more interested in getting drunk.

The Donkey
There are also a couple of explanations why Silenus – if he is not a satyr – is riding on a donkey. One is the scenario where he got drunk on the wedding of Dionysus and Ariadne and did a little rodeo act on a donkey to entertain the wedding guests. Another is that in the Gigantomachy, the War between the Gods and the Giants, Silenus showed up on a donkey, with that confusing the opposite side. A third and quite logical solution is that Silenus is usually riding a donkey cause he is simply too drunk to walk. 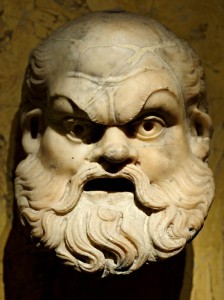 Intelligent
Still Silenus was quite a loved and respected character in Greek and Roman mythology. His big donkey ears were actually proof of that, since big ears were considered a sign of great wisdom. It was also said that Silenus when intoxicated had the prophetic gift to tell the future. And if you’re not convinced by his wisdom yet, let’s quote the man’s catchphrase: “The man who does not enjoy drinking wine is mad.” Suck on that Aristoteles!

King Midas
The most famous Greek myth in which Silenus plays a role is the one of King Midas and his lust for gold. It is the one time that Dionysos lost his companion for a few days, as Silenus is partying with Midas. He entertains the king with music, dance, wine and the best stories he ever heard. When Dionysos finally finds his mentor and drinking buddy again, safe and sound under Midas’ roof, he wants to grant the king one wish. Midas who loves gold wishes that from then on everything he touches turns to gold. As a result he is doomed to never experience the pleasure of good food, wine or sex anymore. Quite a harsh lesson by the God, but this tragedy got a happy ending.

Dionysia Festivals
Speaking of Greek tragedies; at the traditional Dionysia Festivals in Ancient Greece Silenus used to take care of the comic relief between all the ‘mother loving’ and ‘father killing’ on stage. Every three tragedies were followed by a satyr play with Silenus, in which several mythical figures were placed in different settings. These satyr plays were the cradle of modern day comedy, or in another word: satire.

4 thoughts on “Silenus, the happy drunk from Ancient Greece that taught Dionysus how to party”