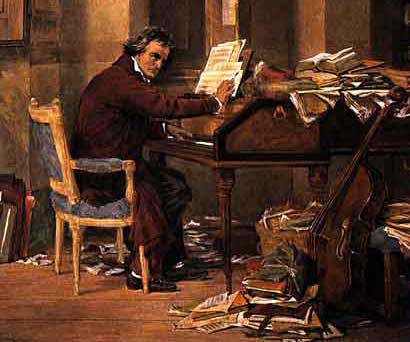 A portrait of Ludwig van Beethoven at work, right before he would normally hit the tavern.

It’s almost impossible to have never heard any of Ludwig van Beethoven’s work, even if you are not into classical music. His work has been used in plenty of movies or as samples in music by The Beatles, Alicia Keys and Nas, to name a few. However, how pleasant and calming his music may sound to the ear, so different was he in real life. Van Beethoven was a very antisocial man and the opposite of the social drunkards we all like. He could be very mean, abusive and downright paranoid. However it wasn’t all that bad. He hardly ever missed a day of heavy drinking in his whole life and still became one of the greatest musicians of all times. One has to admit that’s pretty impressive.

Ludwig van Beethoven was born in 1770 in the German city Bonn. His love for the music of Wolfgang Amadeus Mozart drove him to Austria, where he lived and died (aged 56 in 1827) in the capital Vienna. Even though the German composer of Flemish descent spent his life in only two cities he moved no less than 71 times. That basically explains what kind of man he was; quite a difficult one to live with. He abused and distrusted everyone, including his friends. Van Beethoven was so paranoid that he thought all servants were stealing from him, if not plotting to kill him. Basically he only cared about himself and his three hobbies music, drinking and womanizing.

The alcohol critics are likely to claim that Van Beethoven’s antisocial character was mainly formed by his alcohol intake. Since both his father Johann van Beethoven and his grandmother on his mother’s side were also quite fund of the bottle (some will say suffer from alcoholism) too, young Ludwig was of to a good start. His favorite kind of drink was wine and there wasn’t a day that didn’t end in his favorite tavern. His mood swings and paranoia both got bigger as Van Beethoven grew older. Once again the alcohol haters will blame the booze, but we should not forget that success can do the same to people. And maybe it was a combination of both for the talented composer.

Fact is that things went really downhill for the musician when he his hearing went backwards. When Van Beethoven was completely deaf in the end he had to give up his career. Without the music he loved so much, he devoted all his free time on his other hobbies drinking and womanizing till he died at age 56. The autopsy showed he was suffering from serious liver cirrhosis. Although it was never proven that this disease was what killed him. There are almost as many theories about his death as the one of painter Vincent van Gogh, another brilliant artist and drinker. Guess that’s the lesson to be learned here: no matter how many people Van Beethoven annoyed in his own times, he made a lot more people afterwards very happy with his music that lived and lives on. And therefor he deserved each and every drink.

More drinkers that left their mark on the world’s history

23 thoughts on “Ludwig van Beethoven, a brilliant composer and an antisocial drunk”