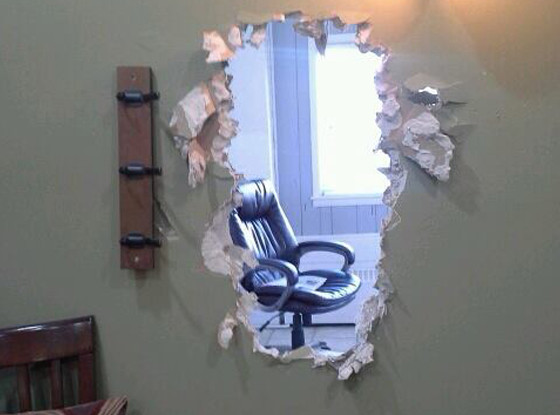 Drunk Student Brian McCurren smashed his way into a therapeutic spa in search for food.

A lot of us get really hungry when they’re drunk, but little of us are willing to go as far as the 19-year old American student Brian McCurren. He literally broke through the walls of a spa for therapeutic indulgence and into it’s kitchen to satisfy his appetite after heavy drinking. The incident occurred last Sunday in South Bend, Indiana. The student at Notre Dame University broke through walls like a wild grizzly bear, smashing everything near him, before arriving in the kitchen where he raided the fridge. McCurren took the weird things we do when we’ve got the munchies to a whole new level and can now call himself the inventor of ‘the hungry grizzly’. Don’t try this at home kids.

It didn’t take a trained Native American to pick up his trail; actually Stevie Wonder could have seen what happened last Sunday. McCurren first threw a flower pot of about 50 kilos through the front door, which triggered the alarm. But the drunk student wasn’t done yet. When inside the breezeway he found a hammer and smashed his way through a drywall and into the actual spa. In there he smashed some furniture and lamps and sprayed around with a fire extinguisher.

When McCurren finally found the kitchen his appetite for destruction changed into actual hunger. Police investigators found out he took several snacks from the fridge which he tried to prepare in the microwave and then apparently forgot about them. He also tried to prepare macaroni and cheese in the oven. When the police found McCurren he was lying on a table, where he passed out while eating drumsticks. Apparently the drunken grizzly finally satisfied his appetite and went to sleep.

Obviously McCurren lost quite a lot on Sunday. In the first place control and several brain cells, his freedom (he was charged with burglary, vandalism and underaged drinking) as well as many of dollars, since the costs he made were estimated into thousands of them. But at least he didn’t lose his sense of humor. When a cop asked him if he also used drugs, McCurren replied: “I hope so”. Epic.