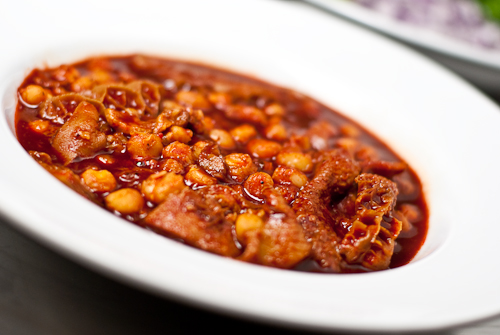 We already gave you some tips and tricks to get rid of your hangover. But every country has its own traditional dishes to make the process go faster. We like to give you a taste of the international anti-hangover cuisine. This time we check out the Mexican cure for hangovers called menudo. This is a tripe soup, but quite different from the ones we know in Europe. Definitely worth a try.

Well what can we say about Mexico? There’s a reason so many Americans cross the border when they want to do some proper partying. It’s the country of lemon flavored ‘cerveza’, tequila and mezcal. Mexicans party long and hard and joining them might leave it’s marks for the morning after. Well, that’s where menudo comes in. The cool thing is that this tripe soup is nothing like the ones you find in Europe. So next time you throw your friends a tequila party, better prepare some of this soup as a welcome surprise for the next day.

Preparation:
Simmer the cow feet and marrow bones in a large pot with 3 liters of water, 5 cut up garlic cloves and a sliced onion for about 15 minutes at medium heat without covering. During this time, skim off the foam that forms. Add the tripe and oregano and cook for about two till two and a half hours approximately.
Remove the cow feet and marrow bones from the pot. Skim the fat that forms on top of the broth. Once the Cow foot cools a little, remove the bones and chop the meaty parts off and put them back in the pot.
While the meat is getting ready, you can prepare the guajilo sauce. Toast the guajilo peppers without burning them. Place the toasted peppers in a bowl and cover with water. Let them soak for about 25 minutes until soft. After that, drain the peppers and place them in your blender with the rest of the garlic, ½ cup of the broth, and if you want the cumin. Blend until very smooth. Strain the sauce using a sieve and pour into the pot. Simmer the broth for another 30 minutes, partially covered. Taste to check how much salt you want to add.
You serve menudo with the additional crushed piquin peppers, lemons, oregano and chopped onion, as well as corn tortillas.

7 thoughts on “Menudo, the remedy after tequila fueled nights”