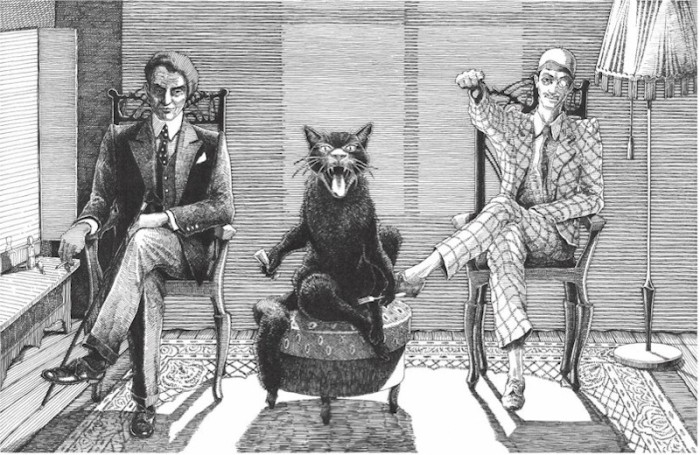 We know that the curse of the hangover is hard to describe with words. Once you live through this hell, you know that language is insufficient to depict your suffering. We have tried it before. But Russian writer Mikhail Bulgakov was eloquent enough to describe in detail the heavy hangover of Stepan Likhodeev from the novel “Master and Margarita”. We offer you an excerpt from Chapter 7, a true literary masterpiece:

“If Styopa Likhodeev had been told the next morning: ‘Styopa! You’ll be shot if you don’t get up this minute!’ — Styopa would have replied in a languid, barely audible voice: ‘Shoot me, do what you like with me, I won’t get up.’
Not only not get up, it seemed to him that he could not open his eyes, because if he were to do so, there would be a flash of lightning, and his head would at once be blown to pieces. A heavy bell was booming in that head, brown spots rimmed with fiery green floated between his eyeballs and his closed eyelids, and to crown it all he was nauseous, this nausea, as it seemed to him, being connected with the sounds of some importunate gramophone.
Styopa tried to recall something, but only one thing would get recalled — that yesterday, apparently, and in some unknown place, he had stood with a napkin in his hand and tried to kiss some lady, promising her that the next day, and exactly at noon, he would come to visit her. The lady had declined, saying: ‘No, no, I won’t be home!’, but Styopa had stubbornly insisted: ‘And I’ll just up and come anyway!’
Who the lady was, and what time it was now, what day, of what month, Styopa decidedly did not know, and, worst of all, he could not figure out where he was. He attempted to learn this last at least, and to that end unstuck the stuck-together lids of his left eye. Something gleamed dully in the semi-darkness. Styopa finally recognized the pier-glass and realized that he was lying on his back in his own bed – that is, the jeweller’s wife’s former bed – in the bedroom. Here he felt such a throbbing in his head that he closed his eyes and moaned…And so, Styopa moaned. He wanted to call the housekeeper Grunya and ask her for aspirin, but was still able to realize that it was foolish, and that Grunya, of course, had no aspirin. He tried to call Berlioz for help, groaned twice: ‘Misha … Misha . ..’, but, as you will understand, received no reply. The apartment was perfectly silent.
Moving his toes, Styopa realized that he was lying there in his socks, passed his trembling hand down his hip to determine whether he had his trousers on or not, but failed. Finally, seeing that he was abandoned and alone, and there was no one to help him, he decided to get up, however inhuman the effort it cost him.
Styopa unstuck his glued eyelids and saw himself reflected in the pier-glass as a man with hair sticking out in all directions, with a bloated physiognomy covered with black stubble, with puffy eyes, a dirty shirt, collar and necktie, in drawers and socks.”

2 thoughts on “One brilliant hangover description in literature”