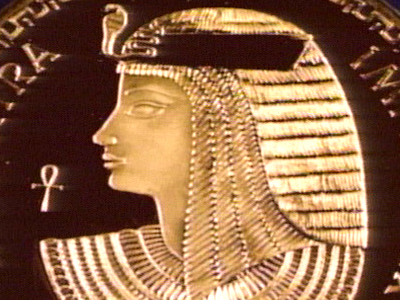 Portrait of Cleopatra in the classic Egyptian style from the side.

All through history it seems drinking was mainly a hobby of men. Sure, women of lower classes could hit the bottle too, but in most cultures and societies it wasn’t very ladylike to get absolutely smashed. Unless you’re the queen of Egypt of course, a culture that was quite fond of drinking. Cleopatra VII was the last Egyptian pharaoh, lover of the Roman leaders Julius Caesar and Marcus Antonius, self-proclaimed reincarnation of the goddess Isis and therefor untouchable. That’s why she was one of the few women in history that could go through life drunk and bathe in wine, without damiging her reputation. Here’s the tale of the queens of drunkards.

Cleopatra was of Greek-Macedonian descent, while her family had ruled over Egypt since the death of Alexander the Great, who was a great drinker himself. During this Ptolemaic Dynasty the royal family always refused to speak Egyptian like the common people, however Cleopatra did. Oh yes, she was a busy woman. And not just learning languages. She first married her brother and co-ruler Ptolemy XIV as this was Egyptian custom back then. On the side she kept a liaison with the Roman leader Julius Caesar, with whom she had a son. When Caesar was killed in 44 BC she hooked up with another Roman: Marcus Antonius, of whom she also had two kids. Now we rushed very fast through a long history full of intrigues. We recommend you to read more about this if you can, but we’re gonna talk about Cleopatra’s drinking behaviour now.

In the ancient world people with power threw the wildest parties. At these bacchanalias, or orchies, large amounts of alcohol were consumed. Great Roman leaders all accused eachother all the time of being filthy drunks. Here’s a nice quote by the Roman philosopher and politician Cicero about Cleopatra’s lover Marcus Antonius: “Your house rang with the din of drunkards, the pavement swam with wine, the walls dripped with it. You are a drink-sodden, sex-ridden wreck.” This reputation would stick to him till the end.

Roman sources also described Cleopatra as a catalyst behind Antonius’ lust for drinking and sex. And took it even a step further claiming the Egyptian queen demanded the Roman Empire from the drunken general in exchange for her favours. Now if there was a sense of truth in this or not, the slander campaign against Cleopatra had begun, as she was accused of excessive drinking. A Roman writing from that time stated: “Her mind is swimming in Mareotic wine, while her speech is slurred by a tongue submerged by incessant wine.”

In that time Roman women were bound to strict rules in their alcohol consumption, where the Egyptian monarch’s believed that through wine and drunkenness they could have direct communication with the gods. In other words: Cleopatra’s drinking was sanctioned by ritual expectation. She was the ‘Lady of Dunkenness’. She was also leader of the female devotees of Dionysos, the god of drinking. Besides the drinking Cleopatra was everything but a humble follower, like a woman was supposed to be according to the Romans. She showed that girlpower already existed in the times BC.

If she wasn’t too occupied drinking wine, Cleopatra loved to bathe in this drink. This was one of the secrets behind her apparent great beauty. It was believed that her wine bath was rejuvenating her skin. Yes, she was living the dream long before we thought of it. Her most expensive glass she drunk after a bet with Marcus Antonius that she could spend a small fortune (10 million sesterces, which would now be around 11,1 million euro or 15 million dollar) on a single meal. The legends says that she had a pearl dissolve in her wine glass and drank it.

Cleopatra was also the last pharaoh. After Marcus Antonius died the Roman troups of Augustus took over Egypt and the new Roman leader wanted to take the Egyptian queen back to Rome, to show her to the crowd as the ultimate trophee. But before he could do that, Cleopatra had already killed herself with snake poison. Cleopatra is remembered as a strong woman, who didn’t settle for a humble role in the background, as was custom for women at that time. She was a real feminist, as wel as a skillful drinker. In the year 30 BC Cleopatra VII died of intoxication, but not the kind she got customed to during her impressive life.