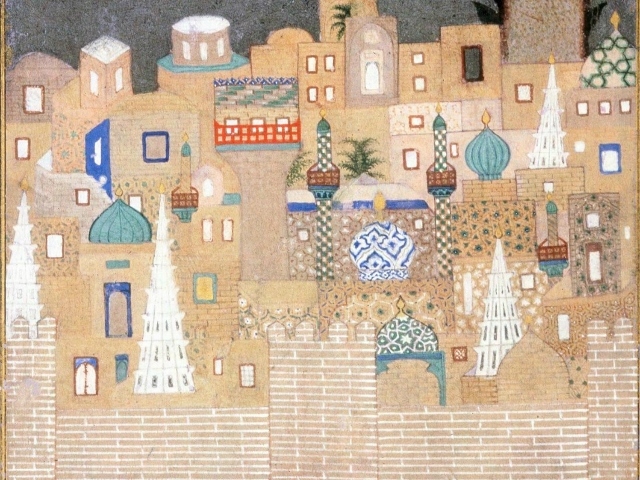 The oldest Arab cookbook dates back from 10th century Baghdad.

The oldest cookbook from the Arab world dates back from 10th century Baghdad. Nice, you may think, but what does that have to do with drinking? Well, in Kitab al-Tabikh (Book of Cookery) the writer Ibn Sayyar al-Warraq didn’t just collect recipes for culinary dishes but also a lot for all kinds of health problems, including a hangover cure. Al-Warraq also gives a recipe for a strong kind of wine. Not bad for a time when alcohol was more or less forbidden in the Abbasid Caliphate.

That we are able to check out these old recipes is thanks to Nawal Nasrallah, a former professor at the University of Baghdad,  who translated Al-Warraq’s work and published it under the name Annals of the Caliph’s Kitchen. Al-Warraq himself died in 961 AD but most of the over 600 recipes in his book are believed to be way older than the 10th century.

The most interesting for us is of course the dish that Nasrallah describes as ‘the ultimate hangover cure’, a stew that goes by the name kishkiyya. The main ingredient is a kind of yoghurt paste called kishk or kashk.  This dish is still made in the original way in parts of Iraq and the Levant. Before we share this recipe, we like to add that Al-Warraq had a few other tips for drinkers. He advised people to eat cabbage before drinking, eat snacks between drinks toavoid getting smashed and start the next day with small sips of water before eating the kishkiyya stew. We published the recipe and cooking directions below this post, if you’re interested.

Just like today the intake of alcohol in the 10th century wasn’t really encouraged in the Muslim world, to say the least. It was around in the Caliphate under the name ‘Wine from India’ and officially just for the ‘infedels’. But of course also many Muslims secretly drunk alcohol, which technically isn’t illegal according to their holy books. 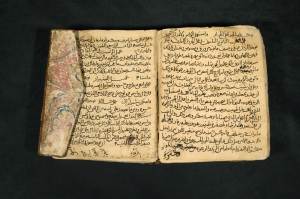 Al-Warraq even included a recipe for wine in his book. This strong wine named dadh was made with 25 kilos of date syrup, 2,5 kilos of honey and 2,5 kilos of hop cones mixed with water. The mix was then put in containers, which were sealed with mud for 2 months.  After this period of fermentation ‘the wine will be splendid’ according to Al-Warraq. A remark that suggests he too drunk from it. He added that some people used an alternative recipe, where they used a substitute for hop cones that according to Nasrallah must have been marihuana. This wine was called sharab al-fusaq or wine of the evildoers.

Now we just owe you the recipe for kishkiyya. Unfortunately it’s not quite clear on all the ingredients but we just pass it on as Al-Warraq did. To prepare this hangover stew you need the following:
1,5 kilos of meat
250 grams chopped onions
120 grams of fresh herbs
a handful of chickpeas
1 piece of galangal
120 ml of olive oil
Seasonable green vegetables (for example chard)
Kishk
Juice of unripe sour grapes
6 grams cummin
6 grams cassia
1 gram cloves
1 gram spikenard 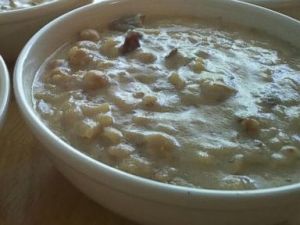 Preparation:
Wash 3 pounds meat and put it in a pot. Add 1/2 pound) chopped onion, 4 ounces fresh herbs, a handful of chickpeas, 1 piece galangal, and 1/2 cup olive oil. Pour water enough to submerge the ingredients in the pot. Let the pot cook until meat is almost done. Add any of the seasonal green vegetables and a little chard.
When everything in the pot is cooked, add 1/2 of kishk. Pound them into fine powder and dissolve them in 2 cups juice of unripe sour grapes. Add it to the cooking pot.
When kishk is done, add 6 grams cumin and an equal amount of cassia. Add a handful of finely chopped onion. Do not stir the pot. When the onion cooks and falls apart, add to the pot 1 gram cloves and a similar amount of spikenard. Stop fueling the fire, let the pot simmer and rest on the remaining heat, then take it down.
This is how to make basic kishkiyya and it can substitute for all other kinds. However, you might add variety by making it less or more sour, to suit your taste, and putting whatever other vegetables you prefer.