A statue of Xenophon in Vienna.

Long before Alexander the Great succesfully annexed the Persian Empire there was a first Greek invasion in the year 401 B.C. Although the mission of the Greek mercenaries to help Cyrus the Younger on the Persian throne failed, since he was killed in a battle, the adventure was documented by the Greek general Xenophon. In this book Anabasis he describes into detail how his army is welcomed in Armenia with old school beer. It gives a nice insight in the drinking culture in Eastern Anatolia in ancient times.

The ancient Greeks in general weren’t big fans of beer. They preferred the ‘civilized’ drink wine and usually looked down on their neighbours that were all drinking some forms of fermented grain. The Egyptians, Thracians and Scythians for example were notorious beer drinkers, usually through a straw to get past the floating mess on top of these early brews. Often the Greeks mocked this drinking habit by comparing it to women performing oral sex to men.

However Xenophon sang quite a different tune in his book Anabasis, as how an Armenian tribe welcomed what was left of his army. Translated in English by Carleton L. Brownson, it says: “The houses here were underground, with an opening like that of a well, but spacious below, and while entrances had been dug for the beasts of burden, people went down by a ladder. In the houses were goats, sheep, cattle, chickens, and their young, and all the animals ate their fodder there in the houses.  There was also wheat, barley, beans, and barley wine in large bowls. These barley-corns were in the drink up to the brim, straws were in it, some larger and some smaller, without joints. When someone was thirsty, they had to take these straws into their mouths and suck. It was quite pure unless it was diluted with water, yet quite pleasant when one was used to it.” 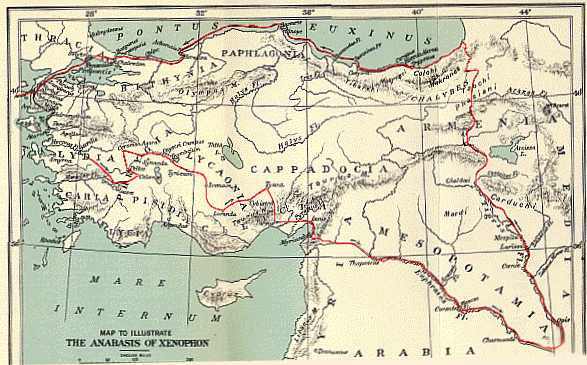 The route of Xenophon’s expedition.

The next day apparently Xenophon got even more impressed by the Armenian hospitality. In his book he wrote: “And there was nowhere where they did not set before them on the same table lamb, kid, pork, veal, and chicken, together with lots of bread, some wheat and some barley. And whenever someone wanted kindly to drink to another’s health, they would take him to the bowl, and they had drink like an ox, having bent over and gulped it down. To the village-chief they offered the privilege of taking whatever he wanted. He accepted nothing, but whenever he saw one of his kinsmen, he would always take hold of him. When they got to Cheirisophus, on arrival they also found [those soldiers] billeted and crowned with wreaths of hay, and Armenian boys in their strange, foreign dress, serving them, and they were showing the boys what to do [by signs], as if they were deaf and dumb. When Cheirisophus and Xenophon had greeted each other, they together asked the village-chief, through their Persian-speaking interpreter, what this land was. He replied that it was Armenia.”

These days the country Armenia is quite a lot more to the north than the place where the Greek generals had their beers. As a result of the Armenian genocide, performed by the Turks during World War I, very few Armenians are left on Turkish soil. Iran does have quite a large Armenian community which is responsible for most of the (illegal) alcohol production in this country. So it’s safe to say that their thirst for alcoholic beverages remained through the centuries, as well as their willingness to share them with others. Sounds like our kind of people.