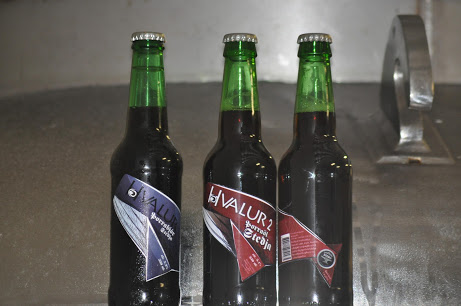 Many brewers make special seasonal beers. However few will go as far as the latest trend in Iceland. The brewery Steðji in the town Borgarfjörður made a special winter beer from smoked whale testicles. This beer that goes by the name Hvalur 2 contains 5 percent alcohol and is made after a traditional Icelandic recipe. So maybe we were wrong when we said that Iceland is a bad destination for alcohol tourism. Real daredevils might just love it.

Iceland is one of the few countries that still hunts for whales. At least it’s good to hear that every piece of these majestic creatures is used for something. To prepare whale testicles in the traditional Icelandic way they are first salted and then smoked. Per brewing at least one testicle is used according to Dagbjartur Arilíusson, owner of the Steðji brewery. “We wanted to make a tasty, quality winter beer that really caught the atmosphere of the winter. Smoked testes really give this authentic taste.”

It’s not the first time that an Icelandic winter beer raised some eyebrows abroad. Last year this season Steðji came with a special beer made from whale stomach and other organs. At first the beer was even prohibited in Iceland itself, because it contained also contained guts. But after a few days Sigurður Ingi Jóhannsson, minister of Fisheries and Agriculture, gave the green light.

For the fans of alcoholic beverages that contain meat, the new whale beer is available in stores in Iceland from January 23rd.

15 thoughts on “Icelandic ‘winter beer’ is made from whale testicles”