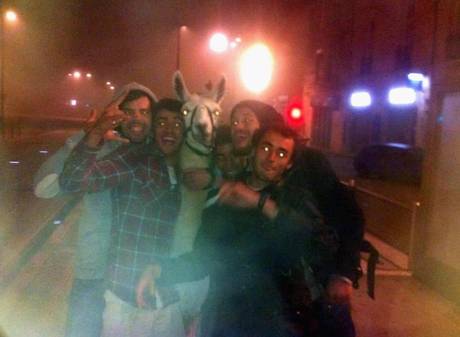 The five friends from France with their stolen lama.

Whoever thought French people just drink without having some good old fun on the side, should really pay attention now. Five drunk guys in Bordeaux pulled off a stunt that you normally only see in movies like The Hangover. In the night between last Wednesday and Thursday they managed to steal a lama from a circus visiting their city. They got caught when they took the animal on the tram. The five lads got arrested, but already there’s an initiative to let them off the hook. Of course we support this lobby fully, since their little stunt brought us laughter and nobody got hurt.

So what actually happened Thursday morning? Well the five friends left a club and decided to check out the circus nearby. One of them, Mathieu, explains: “We went in and played with the animals. We ended up taking the lama with us.” He explained that they were actually after a zebra, but this animal wouldn’t cooperate. Unlike the lama with the name Serge. Mathieu: “It walked with us like a good dog would have.”

The five guys then took the adventure one step further and brought the lama with them as they got on a tram. Some passengers were not the good sports they should have been and warned the ticket inspector. Mathieu descibes what happened: “He (Serge, MB) moved along the tram and we couldn’t hold on to him. The inspector made him get off and tied him to a lamppost.”

A little later the police was warned and the five friends were taken to the nearest police station. The lobby to let them walk free is a big hit since the Facebook-page is going towards 750.000 likes. We can add that Serge the lama is completely fine and actually performed in the circus again the day after. We hope you’ll support these French heroes too. In the name of good old drunken fun.