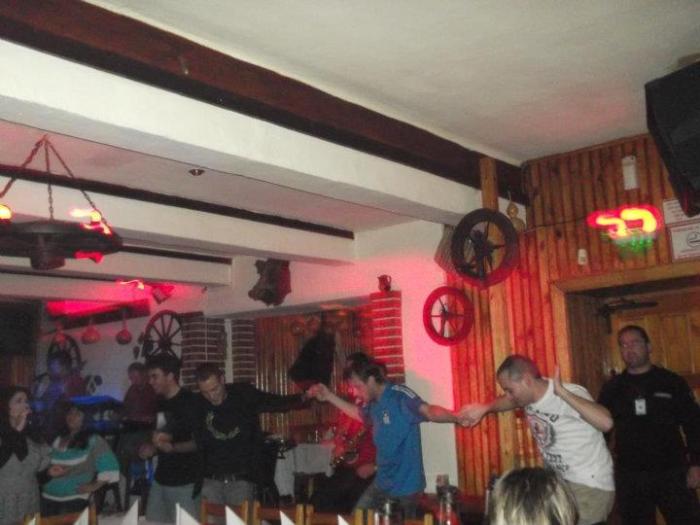 Beautiful traditional entertainment like the mechana in Bulgaria is threatened by the enormous price raise on wine.

Today I received some shocking news. I was just cruising through posts of some blogs we follow when I stumbled upon a post by my friend Annie, She’s an Albanian young woman, studying in Bulgaria with a passion for baking. Ready to read about some new delicious treats, the cold news hit me extra hard. Right there in a post about baking with wine I saw that the wine prices in Bulgaria are going up 20 percent. Imagine, that’s one fifth more than before. And this was just one day after we brought you the message that red wine is slimming. Oh irony.

The reason for the enormous raise of prices is a bad grape harvest in 2012 and the fact that foreign companies (especially Italian) are buying large amounts of Bulgarian grapes. ‘Big deal’, you say. ‘That’s the way the market works’. Well yes, but let’s have a look at the effects on normal Bulgarian citizens.

The average monthly income of a Bulgarian is around 300 euro’s. That amount leaves very little room to have fun, once things like the water and electricity bills have been paid. But you can leave that to the Bulgarians. In general they are the careless kind of people that know how to enjoy the small things in life rather than to complain. Give them a long table, some live music, food and wine and you’re up for one of the best parties you have ever seen.

Bulgarians are also very proud of their wine. It’s not like it has a semi-religious status like in Georgia, but it is considered to be an important part of their cultural heritage. The best example is probably their national holiday on the 14th of February. When the whole world joins that supersweet commercial disaster called Valentine’s Day, Bulgarians celebrate Saint Tryphon’s Day, a traditional wine festival.

During my 4 month stay as an Erasmus student in Bulgaria the local red wine also left it’s mark. Literally as I still have 2 scars in my face from the day my co-writer Nikolay and I drunk many pitchers of fine wine, until I passed out. But also in my memories. The Bulgarian taverns (or mechana’s in Bulgarian) were amazing. Long tables with delicious food, rakia and wine as far as the eye could see. It kind of reminded me of the banquets you see on each final page of an album of Asterix the Gaul.

Pouring some cheap, but very good, wine at a Bulgarian mechana.

Mechana’s, never before in my life have I feasted that hard. Simply because for once I didn’t have to ask myself ‘should I spend my money on food or drinks?’ It was all just there, with live music included and for prices that you would not believe. A liter of wine would be less than 5 euro’s. Therefor it was also accessable for the ‘normal people’.

That in mind, 20 percent extra on the wine could cause a horror scenario. What if the common man in Bulgaria can’t afford these little pleasures anymore? It’s a big blow to an amazing tradition. With some sense for drama one could say that by taking away the wine from it’s own people, Bulgaria is selling it’s soul.

The true spirit of a mechana: drinking, eating and rocking to traditional folk music.

So even though I am living in Holland again and haven’t been to Bulgaria for one and a half year, news like this upsets me. First of all for the many friends I have there, since this price raise will without a doubt have an impact on their lives. And on a more selfish level: if I return in the near future I wouldn’t want certain traditions to have changed. Stuck out here in Western Europe one can only hope for the best. So from here I’d like to express my sympathy for everyone in Bulgaria. Hope 2013 is a better year and please hang on to your grapes this time.

4 thoughts on “A huge blow for the Bulgarian wine lover”