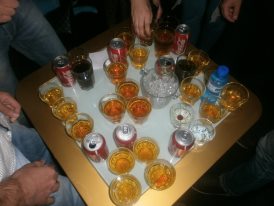 You can’t practice Izbuhvamism without a huge amount of alcohol.

As steady followers of our blog we’re sure you have seen the word Izbuhvam on this site, just under the header of Lords of the Drinks. Many of you have wondered what this means or why we use this catch phrase. Time for an explanation.

What’s Izbuhvam?
First of all izbuhvam is the Bulgarian word for “I explode”. This is traditionally not something to say, but since about a year the catch phrase is getting extremely popular. Although there is not really an inappropriate time to scream this, it is most often used when partying or when getting ready to party. With the heat of the party increasing, so does the frequency of “Izbuhvams” you will hear.

Where did it start?
The epicenter of ‘Izbuhvamism’ is Blagoevgrad, a student city in the South West of Bulgaria. A man named Kostadin Stoev first used the word to express his state of mind at the time. He wanted to drink and party like hell, in other words: explode. The phrase grew rapidly in popularity and became well known all over town. The MMA Club: “Hop” Saint Tropez (a group of students at the American University in Blagoevgrad who are known for his lust for exploding at parties) played a big role in this.
From Blagoevgrad the students – all living in various corners of Bulgaria – have spread  it further all over the country. And even beyond the borders. Because of the international student body Izbuhvam also became a well known term in countries like Albania, Holland and Spain.

What’s Izbuhvamism?
Izbuhvamism is a way of life. The philosophy is more or less that every now and than you have to let everything go and party your ass off. Explode, inflame, erupt or however you wanna call it. Just get away from your busy job or study books. Originally the Bulgarian music style Chalga was closely connected to Izbuhvamism. And even though it still is in the epicenter Blagoevgrad, people from the wider circle proved that it is not an irreplaceable ingredient for the lifestyle. People all over the world are exploding to the key ingredients; whipping music, good company and lots and lots of alcohol.

International Izbuhvam Day
Last summer the internationalization of Izbuhvamism took a big new step when International Izbuhvam Day (IID) was organized. Through Facebook people from all over the world agreed to blow themselves up this Saturday in July. Since this was a great success the organizers agreed to have IID every first Saturday of July from now on. It’s a day that nobody who claims to have party spirit should stay sober. And why would you on a Saturday? Izbuhvam!

The trailer for the first IID.

3 thoughts on “The rise of Izbuhvamism”